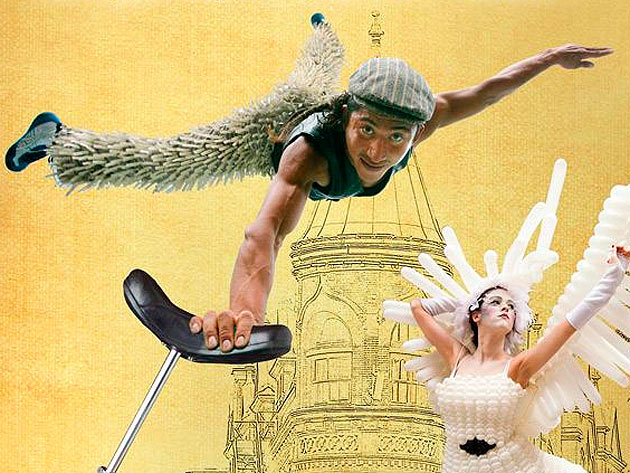 Scotiabank BuskerFest organizers have announced additional breathtaking new acts for North America's largest street performer festival. The 13th annual Scotiabank BuskerFest in support of Epilepsy Toronto inhabits Toronto's historic St. Lawrence Market Neighbourhood once again as buskers from all over the world take to the streets for four exciting days of fun for all ages from Thursday, August 23 to Sunday, August 26.

Last year's festival attracted over 1 million people, and this year promises to be even bigger, with over 100 top buskers from  Australia, Canada, Ireland, Italy, Japan, Mexico, New Zealand, Spain, the United Kingdom and the United States - many of them never before seen at the festival!

Joining those previously announced, these stunning street performers make their first-ever appearances at the festival:

From the U.S.: 2on1 combine the amazing bucket-drumming skills of Peter Rabbit and the incredible acrobatic break-dancing of Snap Boogie (a finalist from the 2011 season of "America's Got Talent"). They bring a high-energy interactive family show!

From Australia/Canada: CACDUS! Together they are the Canadian Australian Comic Daredevil United Syndicate - two men from different mothers, different continents, even two completely different hemispheres, both of who share the moniker "Comic Daredevil"! With wild stunts like Beaver Bowling, Koala Chucking and their famous finale, this is a legendary show!

From the U.S.: Chris Caphart is an accomplished street performer who started on the streets of New York City 40 years ago. His skill at close-up magic is astonishing. His quick comeback verbal skills sharpened on the streets of NYC have made him an outstanding comedian.

From the U.S.:  Our hero, Daniel Forlano, hopes he's found true love. Colorful pillows are tossed full-armed into a high pattern; he climbs (without GPS or oxygen) onto a small table and stands on top of a bottle. He delightfully and masterfully performs impressive hat moves. Perched high on an unsupported ladder, his love hands him flowers for a final display of beauty.

From Australia: Ernest the Magnifico could have been a Beverly Hillbilly - he would have been right at home with the Dukes of       Hazard - but he is Australia's 'Rockin' Stuntshow Comic Daredevil'! Featuring a high-flying stunt-car, a heart-stopping pogo stick and a hilarious comic persona, this truly unique slice of the Australian outback is guaranteed to make you laugh.

From Ireland: Crazy Irish Conjurer Jack Wise was probably the kid in school you weren't allowed to play with. His show is a brilliant combination of Comedy and Magic. Highlights include: turning a volunteer into a hilarious ventriloquist puppet; a kid smashing up their parent's watch and the hair-raising moment when Jack swallows a 24-inch solid steel sword!

From Canada: The Checkerboard Guy, a Comic Daredevil whose manic energy, zany sense of humour, crazy stunts and robust skills have been his passport to the globe! His award-winning comedic variety show has been compared to Steve Martin, Pee Wee Herman, a live action version of The Simpsons and even silent comedian Charlie Chaplin.

From Los Angeles: The Kamikaze Fireflies are an acrobatic comedy duo featuring huge spinning cubes, whirling juggling clubs, cracking whips, a fire hoola-hoop and a backbend that a volunteer can stand on. Their action-packed show - is filled with memorable stunts and gut busting laughs!

From British Columbia: The Copper Cowgirl is an interactive human statue who is sweet and sassy. She combines corporeal mime with clowning to create a wild-west ballet with her audience.

From Montreal: Surreal McCoy, as walking seagulls with working beaks, rummage in bags and pockets, steal food from plates and picnic baskets, cause chaos as usual and squabble amongst themselves. Shrieks of laughter follow wherever they go.

From Montreal: Les Walkyries are a trio of women fire trainers. This high energy, funny fire-acrobatic dance show has ten years of OH! and AH! reviews from around the globe, leaving their mark everywhere from street performing to Cirque du Soleil.

From Toronto: Sleight-of-hand magic with charm. The Mad Magic of Max combines a unique blend of age-old magic with some cheeky wit, charm and dazzling displays of conjuring. Witnessed by audiences all over the world, Max never fails to amaze.

From Toronto: Fesso & Lu. What happens when Lu (a clown who dreams of performing the most elegant of aerial ballets) recruits Fesso (a less-than-cooperative, outrageous buffoon Scaredy Cat) as a partner? This fantastic show includes aerial and ground acrobatics, spirited circus stunts, hilarious slapstick antics, one-up-man-ship and audience participation.

From the US (Florida): Comedian Rob Torres is understood everywhere, without saying a word. Whether he's taking a photo, setting the table, or just sitting down, you're guaranteed to have fun as Rob has a great way of finding absurdity in common everyday tasks. If you're looking for laughter, this is where you'll find it - Rob Torres is the International Man of Mirth!

From Toronto: Legendary beatboxer Scott Jackson, a recent finalist on Citytv's "Canada's Got Talent," lives in a world built by sounds. A door hinge's squeaky creek, a snare drum's darting snap, a helicopter's chopping blades - these are the intricacies he's made his craft. Internationally renowned as a master of sound and ceremony, Jackson wows crowds with his awesome sounds. He is a beatboxer birthed by hip hop but who stretches the art form's appeal at every turn.

From Las Vegas: Cirque Mechanics reveal their new one-of-a-kind performance machine, the Gantry Bike. The 18' high portable pedal-driven Gantry Bike is a freestanding, self-contained circus on wheels. In addition to dynamic aerial acts, the Gantry Bike is driven through and over the audience, providing them with that exciting "front row" feeling!

From Australia: Mario, Queen of the Circus brims with unbridled passion. A born showman and expert in both circus artistry and comedy, the Latin lothario woos audiences all over the world. Mario's unique mix of complex juggling tricks and universal sex appeal can only find release in the arena-rocking anthems of his favourite supergroup, Queen.

From US: Chicago Ultimate Tumblers were established to provide positive after school activities for Chicago's poorest children as well as give the less fortunate youth a safe haven away from crime and violence. CUT will tumble, flip and soar through the air!

From Toronto: The Stilt Guys are performers on stilts whose many walkabout characters include clowns, to Blues Brothers to Mounties! Their interactive old style, carnivalesque fortune-teller incarnation - Art$Fortune - tells your future and sends you away with a grab bag of treats.

From Toronto: Resurrecting a 300-year-old tradition, Woolfe and Petersen's Pocket Carnival present a good old-fashioned Punch and Judy show and an authentic, vintage Flee Circus routine, suitable for all ages.

From Norval, Ontario: Mental Floss Sideshow's vaudevillian presentations include a stage show and a museum-style cabinet of curiosity, based on the rich histories of sideshow, myth and hoaxes - all with a little dash of snake oil.

From Australia: Three-time Metro People's Choice Award Winner (2006-08) - Australia's Alakazam - triumphantly returns to the festival after a 3 year hiatus with his freaky body contortions (he's not called The Human Knot for nothing), cheeky comedy and ridiculous, sky-high feats of danger.

From Australia and the UK: Dream State Circus, the Aussie/English duo who took home the Metro People's Choice Award in 2009, incorporate high-skill acrobalance, juggling and incredible fire manipulations to delight and entertain with their upbeat shows; hand balancing, juggling, fire, knives and whips - a brilliant balance between comedy and dangerŠ literally!

From Mexico: Charistmatic acrobat Pancho Libre astounds with his mind-boggling feats of circus stunts, fire manipulations, martial arts and humour. Be prepared to see a BIG Mexican hula hoop with more than one use, and a high-flying human flag.

From Toronto: Silver Elvis (creation of Toronto performance artist Peter Jarvis) is a robotic statue of Elvis that (not unlike Elvis) is cash activated. This Memphis mechanical metal man moves for money, honey - "thank you, thank you very much."

And many more great acts are set to explode onto the streets!

MORE THAN BUSKERS: The festival also includes vendors selling treasures from around the world, and one-of-a-kind artistic creations. Food stalls, many hosted by the St. Lawrence Market Neighbourhood's own outstanding restaurateurs, offer everything from funnel cakes to souvlaki to roasted corn. Kids will have a blast at Scotiabank BuskerPlay with free workshops in balloon twisting and face painting, clown and beatboxing and more family fun.

ADMISSION: Pay-What-You-Can at the gate, in support of Epilepsy Toronto. Epilepsy Toronto is dedicated to the promotion of independence and quality of life for 40,000 Torontonians with epilepsy and their families, through counseling, information and support.

There are two special BENEFIT EVENTS at the festival that also support Epilepsy Toronto: the spectacular annual Fire Show showcases the 'hottest' fire performers at the fest (Fri. August 24 at 9:30pm - rain date August 25) hosted by Toronto's own FireGuy; and the Grande Finale group show (Sun. August 26  at 6:30pm) where the winner of the Metro's People's Choice Award is announced.

EPILEPSY TORONTO: "One in every 100 Canadians experiences some form of epilepsy and for the past 13 years, Scotiabank BuskerFest has raised close to $1 million in support of Epilepsy Toronto," says Geoff Bobb, Executive Director of Epilepsy Toronto.  "Through the generosity and support of festival spectators at Scotiabank BuskerFest, we can continue to help those living with epilepsy and their families as we have been doing for the past 50 years."