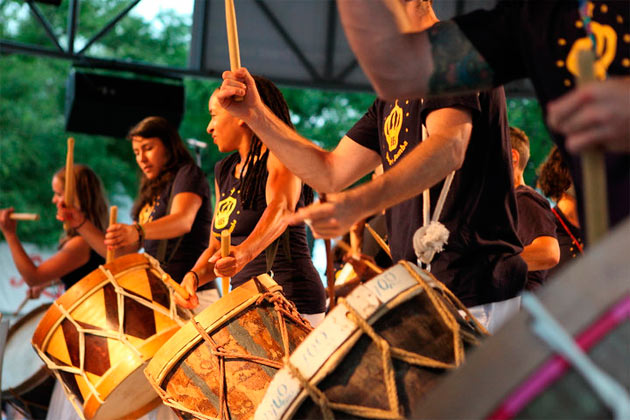 The 13th Annual Muhtadi International Drumming Festival (MIDF) will host numerous international artists from around the world on stage on June 9th and 10th 2012.  An inspiring group that will be sure to entice the audience with their floor-shaking rhythms and vibrant dances of North-eastern Brazil is Baque de Bamba led by Juno Award Nominee Aline Morales.

Baque de Bamba is a Toronto-based percussion group who performs traditional Brazilian percussion rhythms such as maracatu, coco and the afoxe. They are not new to MIDF – they have shared their passion and energy with MIDF audiences in the past.

Aline Morales leads Baque de Bamba and recently received a Juno nomination for World Music Album of the Year for her debut solo album, Flores, Tambores e Amores. Since her arrival in Toronto, Canada in 2003, she has been a tireless promoter of the traditional maracatu rhythms of Northeastern Brazil, performing with her 30-member percussion troupe, Baque de Bamba, at countless outdoor festivals, leading parades through Kensington Market in Toronto and even starring in Ontario Tourism’s “There’s No Place Like This” commercials. 'The baque' perform at concerts, music and cultural festivals, fundraisers and street parties .

Beginning with 5 main percussion instruments of maracatu music, (the alfaia, the caixa, the gongue, the abe, and the mineiro) accompanied by the haunting melodies of the call and response vocals, a Baque de Bamba performance is a high energy celebration of rhythm and voice that can include up to 25 performers. Exploring a more urban and comtemporary style wthin the Brazilian musical mosaic, Baque de Bamba have also begun to perform with elecrtic guitar and a horn section which includes the tuba.

Maracatu Baque de Bamba leader Aline Morales has been introducing Brazilian rhythms to Canadian audiences since her arrival here in 2004 from Brazil. An experienced performer and teacher, Aline's training in capoeria lead to her interest in music, which eventually lead to her joining one of Brazil’s most renowned maracatu groups, Nacao Estrela Brilhante do Recife, led by Mestre Walter de Franca. In Canada, Aline Morales has performed with many Brazilian and Canadian artists such as Samba Squad, Maninho Costa, the Torornto Tabla Ensamble and others. She also co-founded and directed the group Maracatu Nunca Antes.

Muhtadi International Drumming is an arts and culture not-for-profit organization that hosts the annual free event held in Toronto in June and the annual Drum Beats program celebrating Black History Month. The festival celebrates the drum, its universality as an art form,  and its presence in all cultures around the world.